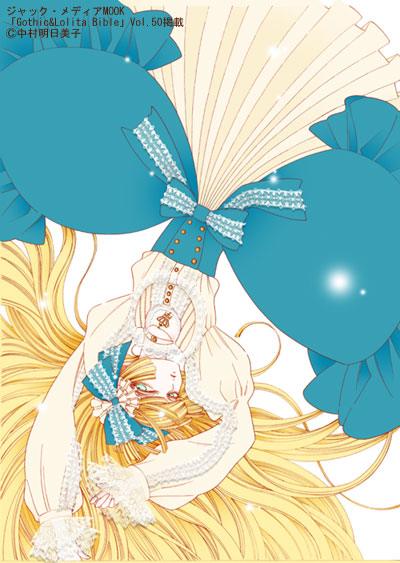 a famous manga artist for many oneshots for Gothic & Lolita Bible and "A Reject and The Bride: THE MANGA (ノケモノと花嫁 THE MANGA)" ongoing on KERA!


From illustrations by Nakamura sensei,

we made dress pattern and worked with sensei, considering gaps between 2-D and 3-D,


For the blouse we arranged plenty of original lace on soft pearskin, and the skirt is made with voluminous tropical material and pearskin pleats.

We also produced a head bow made with the very same fabric with the skirt. For the necklace we ordered original charm just for the series.


To wrap up the series, Nakamura sensei create a fabulous illustration: visional painting featuring a girl dressing in dainty outfits full of lace, tucks and pleats falling into a dream.

The one that beautifully represents the world of Nakamura Asumiko×Innocent World.


Each copy of Gothic & Lolita Bible Vol.50 (now on sale) includes 2014 Monthly Planner Book, with this illustration on the front page. Each page has beautiful painting too.

Although the magazine all written in Japanese, you can still use the planner book if you can read English.

Don't miss this special occasion to get one with this fabulous planner!

Ellen Clapsaddle ～A gifted illustrator with full of love～


With her soft and unique drawings she was recognized for her talent soon,

drew for many publishers in Europe and USA.

they bombed Berlin where she resided at that time during the WWⅠ.

Printing offices were destroyed with her original drawings inside.

We have no clue how she lived in Germany all alone without means to her activities,
cause in those days most of pictorial postcards were produced in Germany for all over the world.

In 1917, the year that Americans came to be able to travel in Germany freely again,

she was found with body and soul damaged which couldn't be recovered; she was all washed-up as a painter actually.

Back in the USA, treated by the Wolf bros., publishers who had sent her to Germany,

and after their death she took her last breath in an institution in New York, 1934.

We know that some say Clapsaddle was star-crossed,

but she's a painter loved all over the world even now,

with 3000 drawings and 3 millions postcards.

In her canvases, you can see angels and children with loving smile on the faces.

It's the postcards that make senders and receivers will be glad just the same.

This time, with original arrangements,

we will design items featuring her tremendous images.

May love from angels get to you all. 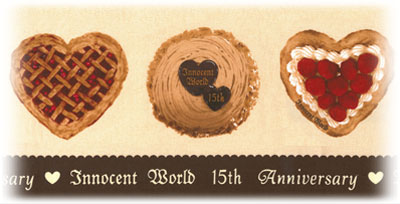 We stick resolutely to material itself, the Pastry print - we had to start from making pies from scratch.

Then, we asked "Ann Doll", our favorite tearoom, to bake pies designed on our own.


"Ann Doll" is a small cafe in British-style founded in 1984, by a couple who wanted to have their customers authentic sweets made by hand.

In a business area, its front porch welcomes us always with lovely flowers, which is award-winning beauty by their hand.

You can enjoy roses in these days. Ones trail up to the roof, the others in the pots. Please imagine a lovely cafe surrounded by these roses.


Inside the teahouse, you can enjoy classical music on antique chairs.

This tea shop sometimes offers us music performances like concerts and operettas. 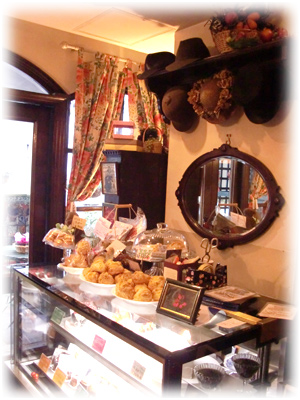 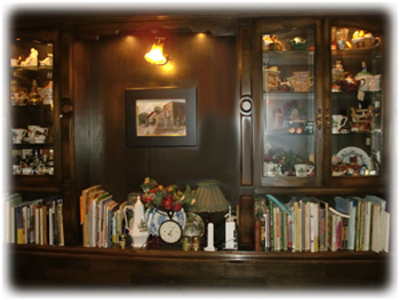 Please start off with Afternoon Tea Set (￥1500, the photo shows two portions）if you don't know what to take there.

You can enjoy hearty sweets like sliced fruits, cookies and yogurt, sandwiches as well as cakes and scones.

Of course you can enjoy a few cups of tea by Ann Doll, which is selected as one of the "tearooms with a nice cup of tea" by Japan Tea Association. 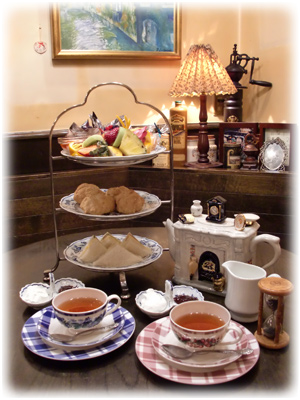 Born in Moravia (the present Czech Republic) in 1880.

Moved to Paris in 1887 for studying at Académie Julian.

In those days he made his living by advertising illustrations for magazines.

In 1894, his life reached a turning point: filling in for a painter who turned down a new advertising poster.

Having made his debut with the advertisement for a play Gismonda featuring a legendary actress Sarah Bernhardt,

he achieved overnight stardom as a famous graphic artist.

They got a lot of commercial value as well as artistic value.


As well as advertisements,

he designed tons of things in our daily lives;

from product packages, perfume bottles and accessories to platewares, interior decor and bills or postal stamps

There we can see his popularity as a graphic artist.

often surrounded by lush flowers which sometimes formed halos behind their heads.

His style is called "The Mucha Style",


This time we got inspiration from his series works "The Flowers",

which were exhibited for the first time in 1897.

In this series personifying four flowers that consist of Rose, Iris, Carnation and Lilly,

he depicted those flowers as beautiful women.

Among all he found the greatest success in depicting flowers.

just because he might long to show beauties of this world to as many people as possible.

And we believe he might think that true beauty cannot be superficial,

but beauty and harmony inside.


This time we had an honor to produce clothing inspired his works.

We'd be so proud if more people can touch his beauty through our items.


May each world of you be filled with each beautiful harmony...

～Introducing Kuniyoshi Kaneko, an artist from the world of mirages and playgames"～

～Introducing Kuniyoshi Kaneko, an artist from the world of mirages and playgames"～


Kuniyoshi Kaneko (born in 1936)
From early childhood he's been influenced by stages and screens.

During his years majoring fine arts at Nihon University he studied under Tomohiro Nagasaka, working in Kabuki stage art.

In 1964 he started drawing on canvas as a self-educated oil painter; after 3 years he made his brilliant debut as a painter with a solo show called "Hana Saku Otome-tachi (Young Girls in Flower)".

With Tatsuhiko Shibusawa (critic), Simon Yotsuya (doll maker) and Junko Koshino (fashion designer) he spent an age together. Having energized each other to flourish their own talent, they became icons of the time.

Not only in paintings, he has been playing an active part also in various works including art direction for screens and stages, art photographs,
producing covers for magazines and novels and designing kimonos--he's nothing but a genius.

In every his work we can see his consistent aesthetics that attract all over the world with the uniqueness,
daintiness and mysteriousness of his own perspective of the world.


Our first theme is "Alice", a synonymous with his works.

We proudly focused on illustrations from "Alice in Wonderland" published in Italia, 1974.

It's a luxurious Christmas present from Olivetti to every grade School all over Italia for introducing their own printing and binding technics. The book is highly acclaimed as an opportunity for young talents to express themselves representing a famous nursery tale.

15 pencil drawings for the book always invite and show us a brand-new world on his own that we never see before, although they still stay true to the story--like the clock rabbit invites and shows Alice the Wonderland.


With an essence of mysterious wonderland inside, we're ready to show you items for "Innocent World × Kuniyoshi Kaneko".

～Introducing the Artist with warmth expressing "a small world"～

～Introducing the Artist with warmth expressing "a small world"～

Yutaka Tsuchida
Born in Tokyo in 1957,
Studied ceramics on the undergraduate and postgraduate levels at Tokyo University of the Arts.


Using plants, flowers and lovely animals as a motif, Tsuchida-sensei produces pieces in clay and in watercolors express a rich story of a precious moment in in the midst of nature.
Now he creates mainly water-color paintings at his atelier in Karuizawa, a famous area of summer villas in Nagano Prefecture.


With a dreamy atmosphere his works enchant all who see them.
It's just because of endearing behaviors of animals and moments of peace painted there.
Each piece has its name like "Yoku kiite (Listen to me now)", "Yonda no ha kimi? (Was it you that called me)?" and "Tsutsumarete (Amidst)" that brings us a cheery smile.
That reflects some of his personal interest.
In his paintings, you can see rabbits and squirrels appearing frequently as well as a field of wildflowers.
With a touch delicato, he presents tenderness and warmth of animals, sunshiny fields and even the breath swaying grasses there vividly and exquisitely.
We can feel sincere efforts for expressing freely his respect and affection to the nature.
"In Karuizawa's natural scenery , colorful flowers and fluffy animals, tiny insects or seasons coming and going among roadside trees make me overwhelmed and think I cannot beat them anyhow. May those feelings of mine fill you more and more..." He continues creating like this.
That's why every his piece gets so warm and comfort all who see it.
This time we deal with one of his pieces for a collaborative work,.
It's our favorite wood-block print called "Michi an-nai (Leading the way)" which we always hang in our atelier.
We're so excited to work with him like this,
and hope we could express his thoughts to everyone who see, touch and get the items for this series.